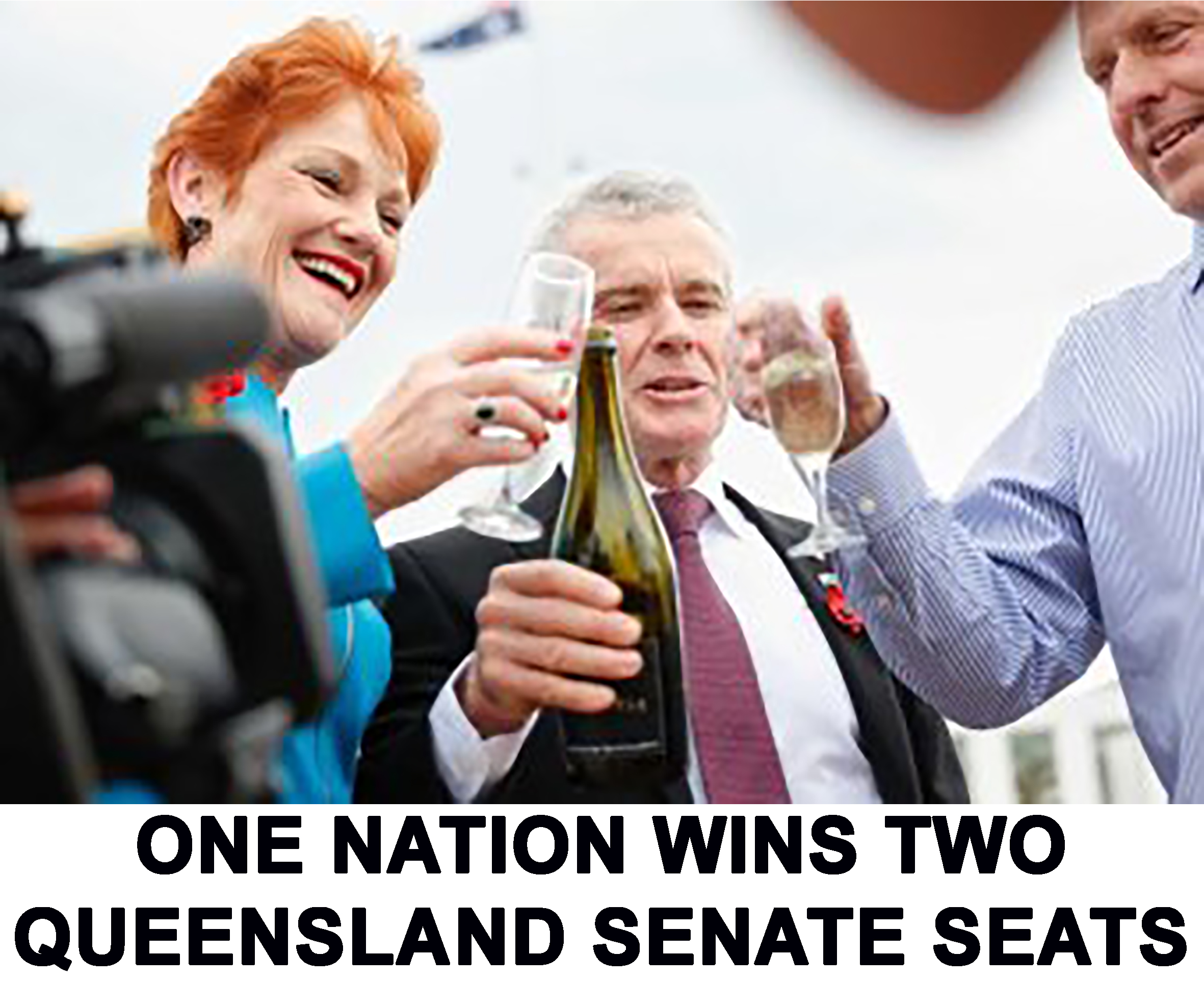 Using a comparative analysis of election ranking between 2013/2016, the data clearly show that Hanson and the Liberal Democrats have had significant election increases in ranking by 10 and 7 places respectively, making them well positioned to take the 12th Senate seat.

Depending on the level of vote exhaustion and direction and timing of preference flows to Hanson or the Liberal Democrats, either party could pick up the 12th spot at this stage.   However, it will definitely not be the Greens, ALP and unlikely the LNP, who show no difference in rankings.

Though, with a new last minute, un-tested voting system in play, of course there always remains the possibility that an anomaly ‘wild-card’ could pop up and unsettle the apple cart.

The following table presents the Queensland comparisons of party ranking between the 2014 and 2016 elections: 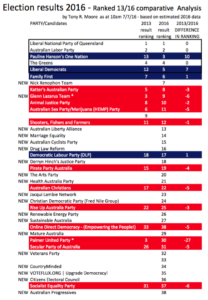 The table reveals that Hanson and the Liberal Democrats have shown the most significant increase in ranking from 2013 to 2016.

Another interesting revelation is the extensive reshuffling and volume of new parties entering and old parties going.  As such, these shifting sands of the Senate ballot and high party attrition and startup rates are symptoms of Australia’s media backed Senate options not meeting the people’s needs.

To explain, there are massive decreases in votes for other conservative/right parties like Palmer United, Australian Christians and Rise up; but also a massive decrease in votes for progressive/left parties like the Pirate party, the Socialist equality party, the Secular party of Australia and the Australian Sex and HEMP Parties.  These appear to be collateral victims and are clear symptoms of a people in search of something more centrist and commonly conservative, that they are yet to find.

The people have been disillusioned with the governments they elect for some time, and have been burnt for trying to change them.  In my assessment of voting behaviours this election, below-the-line voting has fallen fatally to it’s lowest level ever, just 0.018% of the vote. As such, electors are simply unwilling to take direct action themselves or offer more effort.

The quota required to be elected is 8.33% of the vote.  There are simply not enough electors voting below-the-line to achieve even 2% of that quota, therefore the below the line method is pointless.

So again the people are unwilling to put in more effort, and as such, desperately want to abdicate to a ‘new conservative party’ or popular voice to stand behind; one with a trusted face, strong universal appeal, voice and fight.  I’ve coined this pursuit ‘political personality’.

The Australian Liberty Alliance (ALA) thought that they were the people’s political personality this year, but have been rejected with only 1.4% of the vote.  From what I can see, the ALA and their Senate personalities just did not come across as viable, credible or as having the political personality that is palatable to the people, in spite of the massive media support, but they are not alone.

The Greens, although retaining a solid vote for some time, and who get media attention, do not have the right political personality either.  The Greens, I believe have peeked at just under 8% of the vote in Queensland.

Katter for a brief moment in 2013 almost moved into that space, but Palmer then and Hanson now, aided greatly by the media, pushed him aside and Katter’s vote fell 1% to 1.83%.

So, it appears that the people have vicariously built a glass ceiling of 10% of the vote that a ‘political personality’ must capture and retain to remain longer than a term.  With that in mind, I don’t believe Hanson has it either.

What we are seeing politically around the world in current election and referendum results, is a fumbling of the people’s pursuit of political personality, mislead by the media’s focal point and instead distracted by the presence of a ‘destiny of hope’, that sees their support filled by the most likely successor or the next big thing, as is the case of Palmer, Hanson and Trump in the US.  The 7-8% pendulum swings from one party-hopeful to the next each election is evidence of this.

The Hanson affect seen in this election result has been aided by the media, who fixed in only the extreme left and right sides of politics to sustain the 24-hour news cycle.  It appears that the Queensland media has favoured Hanson with their attention, as much as the new senate voting system has favoured the Liberal democrats result.

Furthermore considering the AEC data this morning now at 60% of the Senate vote, and noting that is has not really changes in trend since the count was at 40% of the vote.  My current bet is on Hanson as the 12th man in this Senate team from Queensland.

In closing, a few thoughts.  The people’s voting restraint limited to <10% is reflective of their caution.  As such, Hanson and the Liberal Democrats although potential winners, are clearly in this precarious position of being tentative.  Simply, until a party or candidate can breach the 10% ceiling, like Xenaphon from South Australia has done with 24.9% of the senate vote, then those elected as the alternative will be here only a short time or until something better comes along which the media decide to support.

One thing is clear though, if the people ever do find the ‘political personality’ that they are looking for, they will vote for them in droves and this will mark the beginning of the end of the 2-party preferred mythology and pseudo election system.

In closing, there are several days, if not weeks to go before this election can be officially called, but clearly Australian politics has given way to personality politics.  Meaning that, the people are now putting their trust and vote in personalities, promise and fame, not parties, performance or policy, and the media are responsible for how we vote.