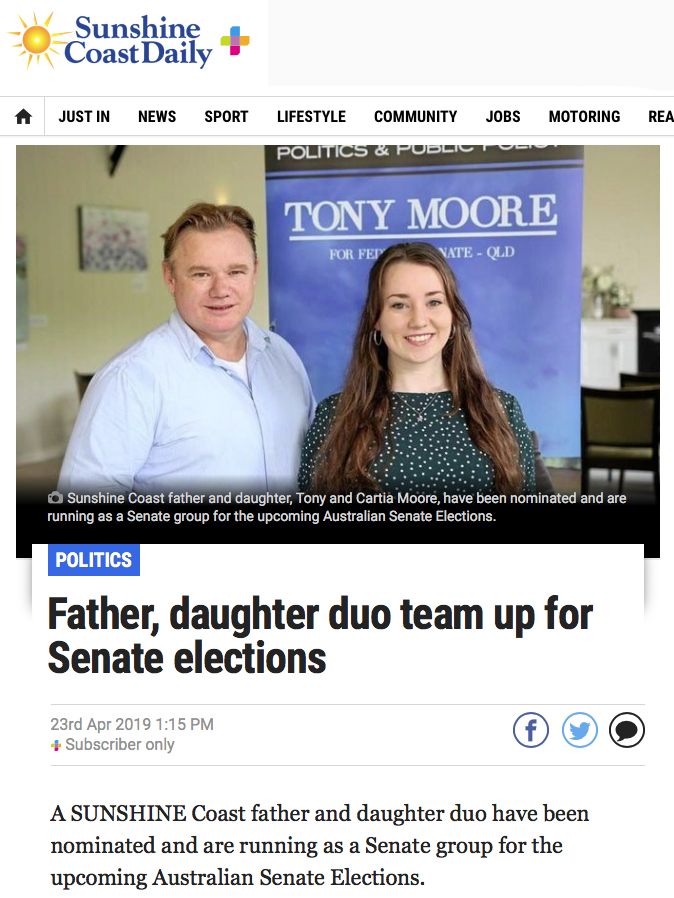 Posted at 21:41h in News, News Articles by Tony Moore

Tony and Cartia Moore are campaigning together on a “sensible-centre” conservative platform.

They are urging voters to support their approach and give them their first vote on the Senate ballot paper.

“Queenslanders are looking for someone to trust with their vote, someone who is intelligent and educated, stable and level-headed but with a heart that cares for the people,” Mr Moore said.

“They need to know we are an option, motivated, ready, and genuinely care about making Australia not just great, but the best that we can be.”

Mr Moore has been a candidate in six elections, both state and federal, but this will be his daughter’s first election as a candidate.

Mr Moore knows just how important a good education is, having gained various tertiary qualifications, including an MBA and a Masters in Politics and Public Policy.

Ms Moore, 21, has recently completed her degree from the Sunshine Coast University.

Having grown up in a political family, she has observed her father, who began his career as a cabinetmaker, be moved by injustice and the abuse of people, realising the only way to make change was to become politically educated and “get in the game”.

“From my perspective, whoever has the greatest ability to listen to all generations, even the quiet and forgotten, and also the capacity to act on their behalf, they are our champions and they deserve our support,” she said.

The young Senate candidate has chosen to help her father form the Tony Moore Senate team, giving Queensland voters the ability to vote for them both above and below the line.

“I am inspired and encouraged by Cartia’s decision and that there are some in this generation leading a quiet grass-roots revolution, and who are engaging in politics and taking charge of Australia’s future,” Mr Moore said.